Becoming a parent is a life changing moment for anyone.  I was immediately filled with fear the moment my daughter was born, for all the things she would have to face in her life. One of those fears was that she would not be a fan of music, but my wife assured me that in our family, that's just not possible.  Still, I made a plan: Create a 24 hour playlist of music that means a lot to me, music that has influenced me, music that has made me who I am.  This is not meant to be a historical document, a Rolling Stone list of the top ## of whatever, it is meant to be a guided tour, for my daughter, of the music that brought me to the point in my life where I was standing in a hospital room with a newborn in my arms, something I thought, at times, might never happen.

Below I've broken down the list hour-by-hour.  This is not THE definitive list, as I just don't think that is possible with the tools out there and the time allotted.  I did this with resources available in Spotify, and while it is a pretty comprehensive set, there are certain items just not available through Spotify, or any other online music resources that allow me to build playlists exactly the way I want (Tool, get with the future).  Again, can't stress enough that this isn't a historical document, artists are in there multiple times, some songs don't even represent a love for the artist, just that song in particular.   It is a good start, and something that I hope my daughter will find value in some day, even though by the time she is old enough listen to some of this, Spotify may not be a thing (Hence the screenshot playlists). This was a fun project overall, something introspective that can be expressed externally, a piece of who I am to share with someone I love.  If you listen, have fun, this is me.

9AM - Beginning of the work day for a lot of folks.  Music to chill out with, and a nice way to begin the day 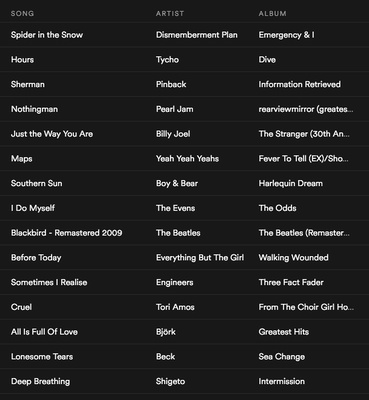 10 AM - A little more playful in the morning.  Start off with some Hip-Hop, beatstrumentals, and synth rock. 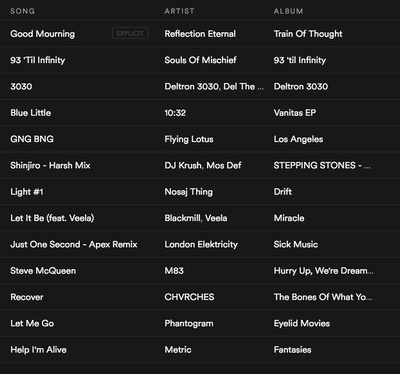 11 AM - Getting a little mixed now, starting with some beach rock and shoegaze, melding it in to alt rock, and some 90s rock 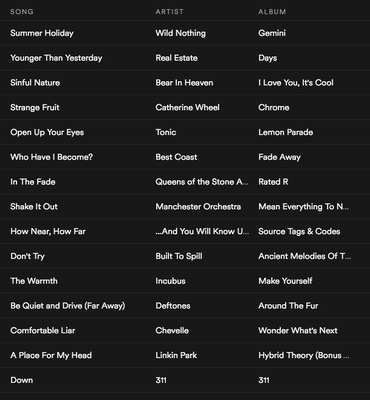 12 PM - Kicking it off with an emo classics - 1 song from each iteration of Further Seems Forever, followed by a mixture of modern indie rock, post hardcore, and alt rock classics. 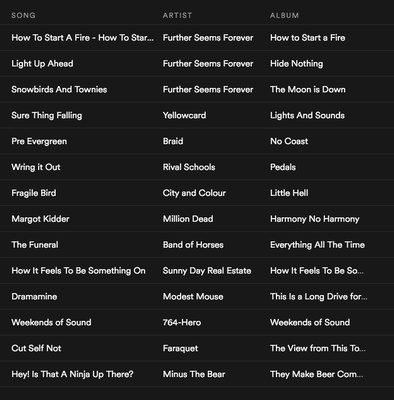 1 PM - Punk grew out.  The multifaceted musical phenomenon spawned a multitude of micro-genres, many of which are great for lunch time listening. 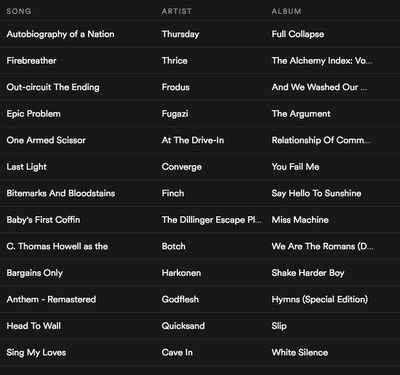 2 PM - I came up during the storied east coast vs. west coast hip-hop days, and they played a large part of my teen years.  This is my personal east vs. west battle set list. 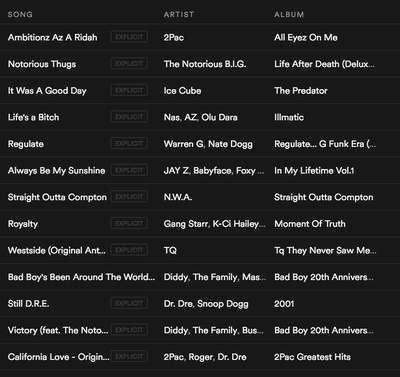 3 PM - Hip-Hop plays a large part in my musical journey,and the turn of the century-slash-early 00s were integral in that.  Neo-soul, New York sound, and some old school flavor fill out the after lunch hour. 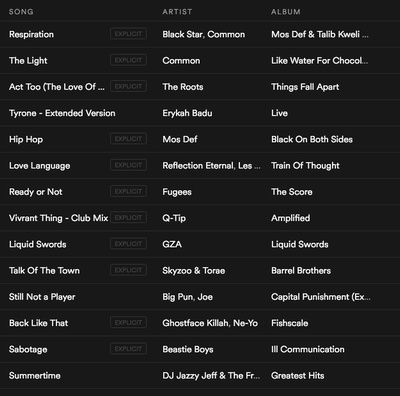 4 PM - Quirky indie rock, and some of the folks that influenced it.  The end of the work day calls for some relaxing top 40 (my top 40) alt-rock and classic rock hits. 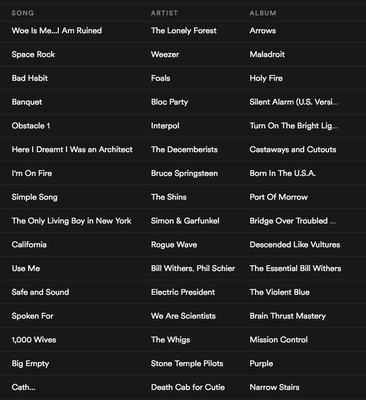 5 PM - End of the day grooves.  A good list of alt-electro goodies 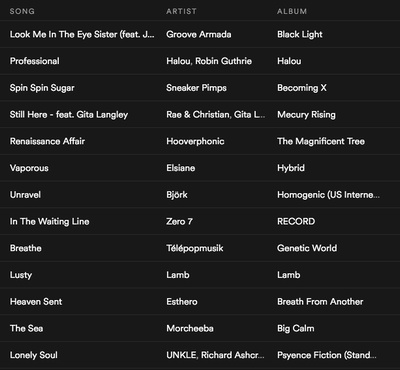 6 PM - Not a lot going on musically at 6pm.  People eating dinner at bars, at home, at friends houses.  Talking, not really listening.  So, I filled this hour with the music that was the background to so many family dinners.  My parents favorites, the ones that stuck with me, helped me understand that music should be fun! 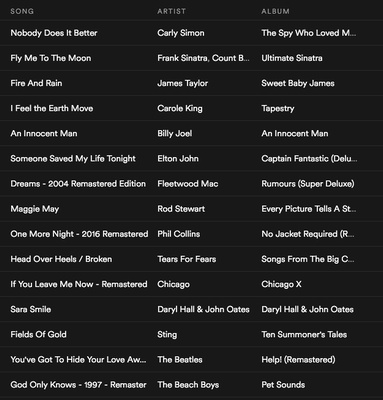 7 PM - This is the "riding the subway to the venue" playlist.  Getting the night out started, chill dance tunes followed by some old school techno. 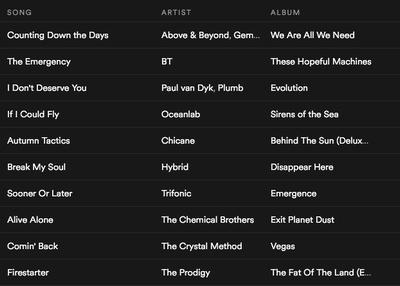 8 PM - A nice mixed bag to get the night started.  Some new school hip-hop, electro pop, and R&B. 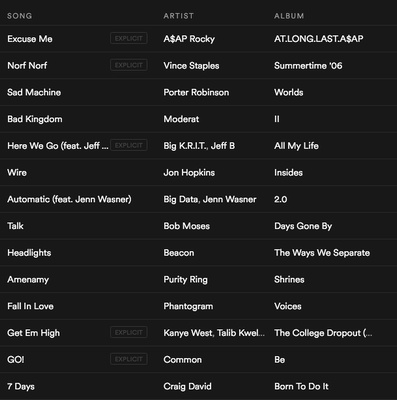 9 PM - A little more fun with this one with some upbeat alt-rock and electro beats. 10 PM - Indie hip-hop for hanging out with friends.  Nuff said. 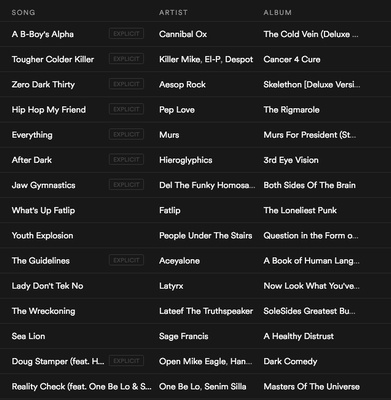 11 PM - Instrumental, beat driven tunes, with a couple of like-minded vocal tracks built in to the mix. 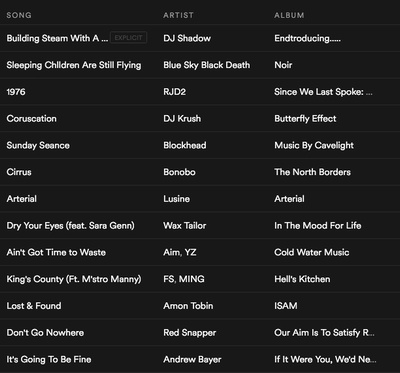 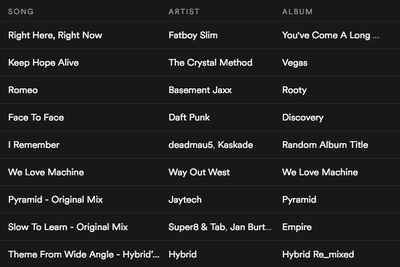 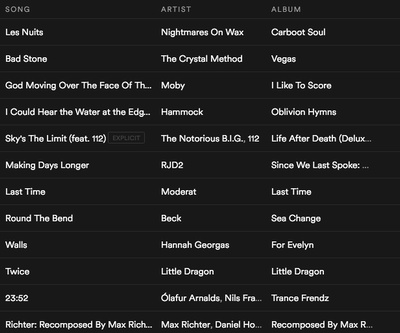 2 AM - It's late, chilled ambient and some orchestral scores to keep the mind at ease 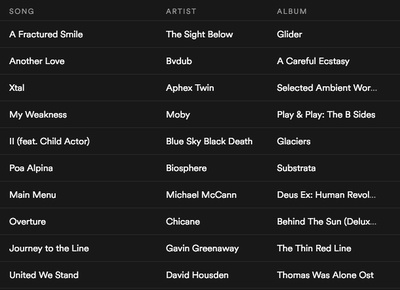 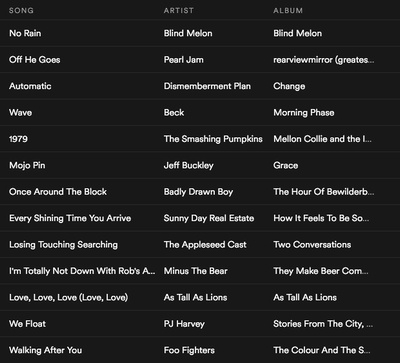 4 AM - If you're up at this hour, you deserve what you get, in this case METAL! 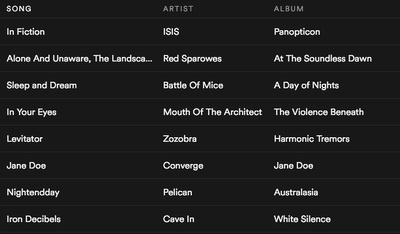 5 AM - Yup, it gets weird.  Chilled electro tunes blended in to classic rock and back again 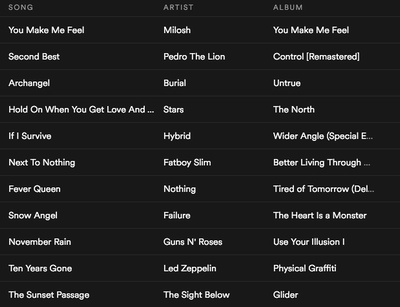 6 AM - Taking it easy first thing in the morning.  Not too harsh for the waking up crowd, not too loud for the clubbers just getting home 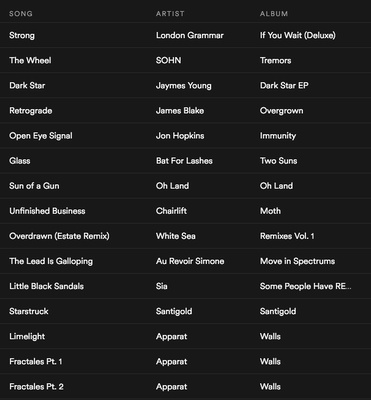 7 AM - Smooth R&B mix for the ride in to work, or the ride home from a loooooong night.  Starts and ends with the King of Pop. 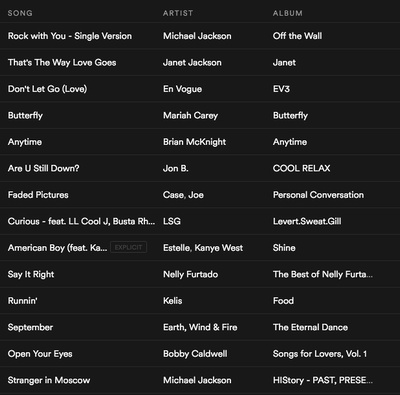 8 AM - You are either starting or ending your day here.  Whichever one it is, Trip-Hop is what you need. 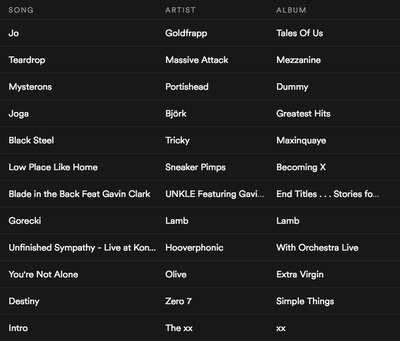 24 hour playlist starting with 9AM (may be better to view in Spotify as the embed link stops at 200 songs).